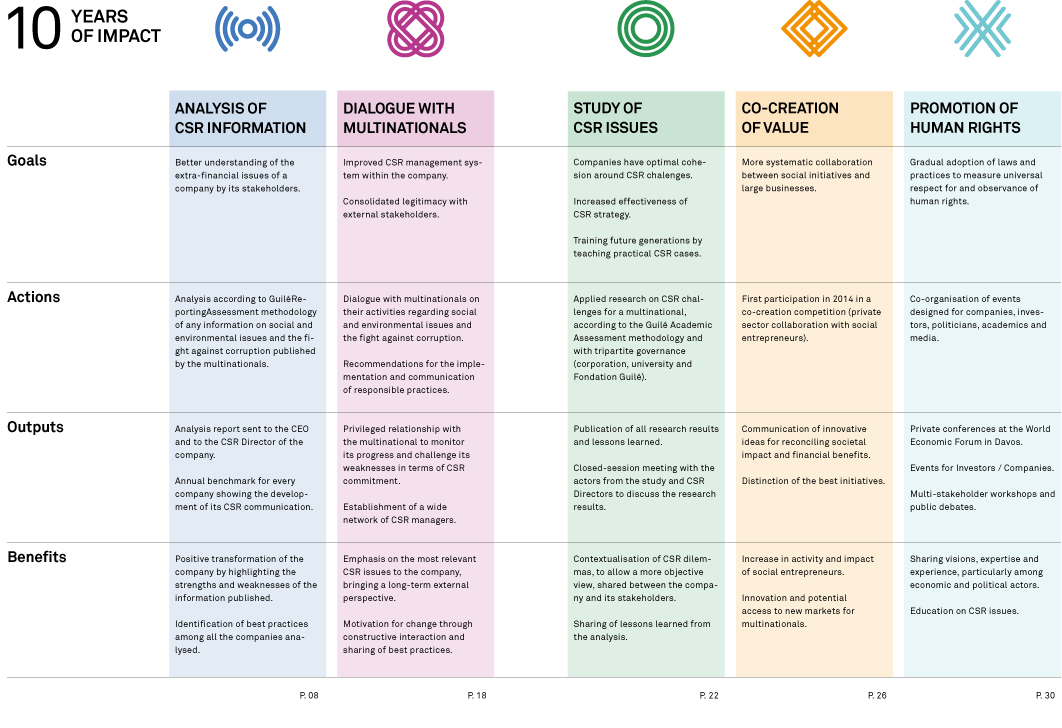 This Retrospective is covering 10 years of action and impact by Fondation Guilé.

RISKS AND CHALLENGES FOR SWISS COMPANIES

More than 500 attendees at the conference with Professor John Ruggie

– Swissinfo ” Swiss need to catch up in corporate accountability” 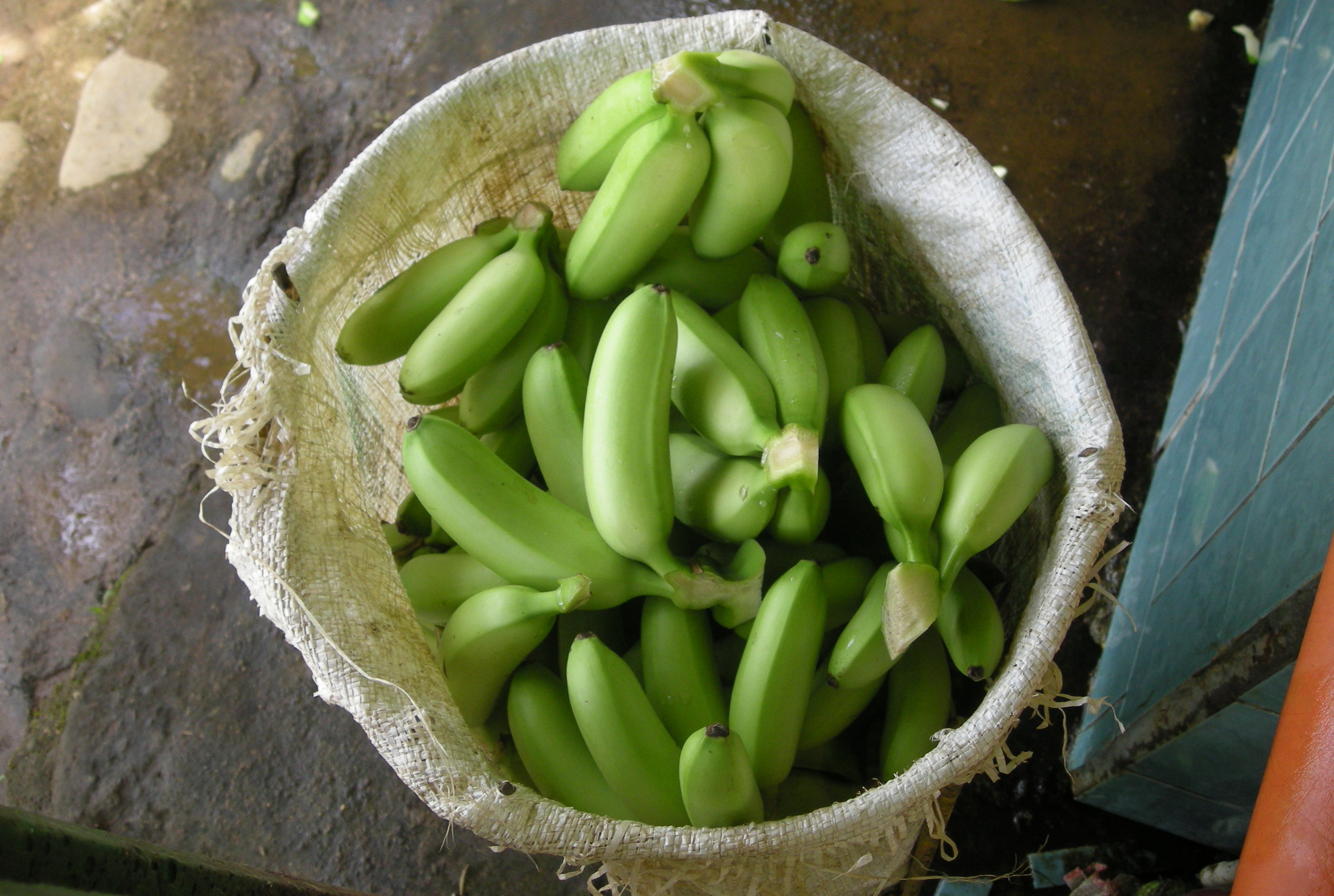 Chiquita’s CSR under the scrutinity of Prof. Palazzo

GuiléAcademicAssessment: the challenge of CSR continuity in a highly competitive environment Guido Palazzo, Professor of Business Ethics at the Faculty of Business and Economics of the University of Lausanne (HEC-UNIL), has just completed a major study on the corporate social responsibility policy (CSR) of the Chiquita company. For one year, and in cooperation with Dr. Dorothea Baur from the University of St.Gallen, he concentrated in particular on the performance of Chiquita’s sustainable development strategy by carrying out a research with external stakeholders, company workers and workers in the field, including in banana plantations in Latin America. Fondation Guilé, a Swiss organisation whose aim is to promote Social Responsibility especially among business leaders, accompanied this project. The Foundation has published a comprehensive report on the results of the study This unprecedented research has been made possible thanks to the “open book” policy proposed by Chiquita.

The study was conducted by independent researchers, who had unlimited access to internal and external sources which allowed for a meticulous and thorough study, with the aim of fully understanding the background and development of Chiquita’s CSR practices. The result is an unprecedented piece of work offering an insider’s view into the complexity of a multinational company’s CSR policy, within one of the tightest markets. The research was carried out via a tripartite governance model, in which the Fondation Guilé played the role of impartial facilitator and intermediary.

Key elements of the research:

The study shows that Chiquita has made significant efforts and spent a lot of time on protecting its social and environmental commitment by anchoring it to daily and routine processes within its teams and building its CSR policy into an integral part of its corporate culture. However the viability of this strategy will be shown by its sustainability in the long term and one cannot help but wonder whether the Cutrale group, the new owners of Chiquita, and one of the world leaders in the production of oranges, will continue the CSR commitment Chiquita began more than 20 years ago. It also remains to be seen whether Chiquita’s CSR efforts can become more credible and be converted into tangible returns to the company’s stakeholders.

The study by Professor Palazzo and Dr. Baur is particularly aimed at practitioners, teachers and their students, and university researchers. Its goal: to improve the general understanding of Chiquita’s corporate responsibility strategy in order to draw lessons for other companies. 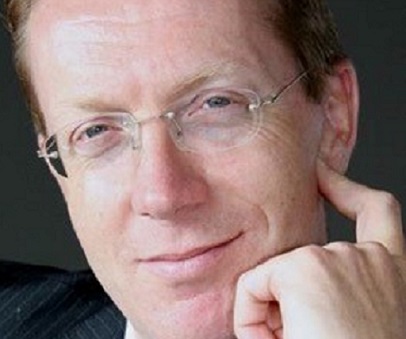 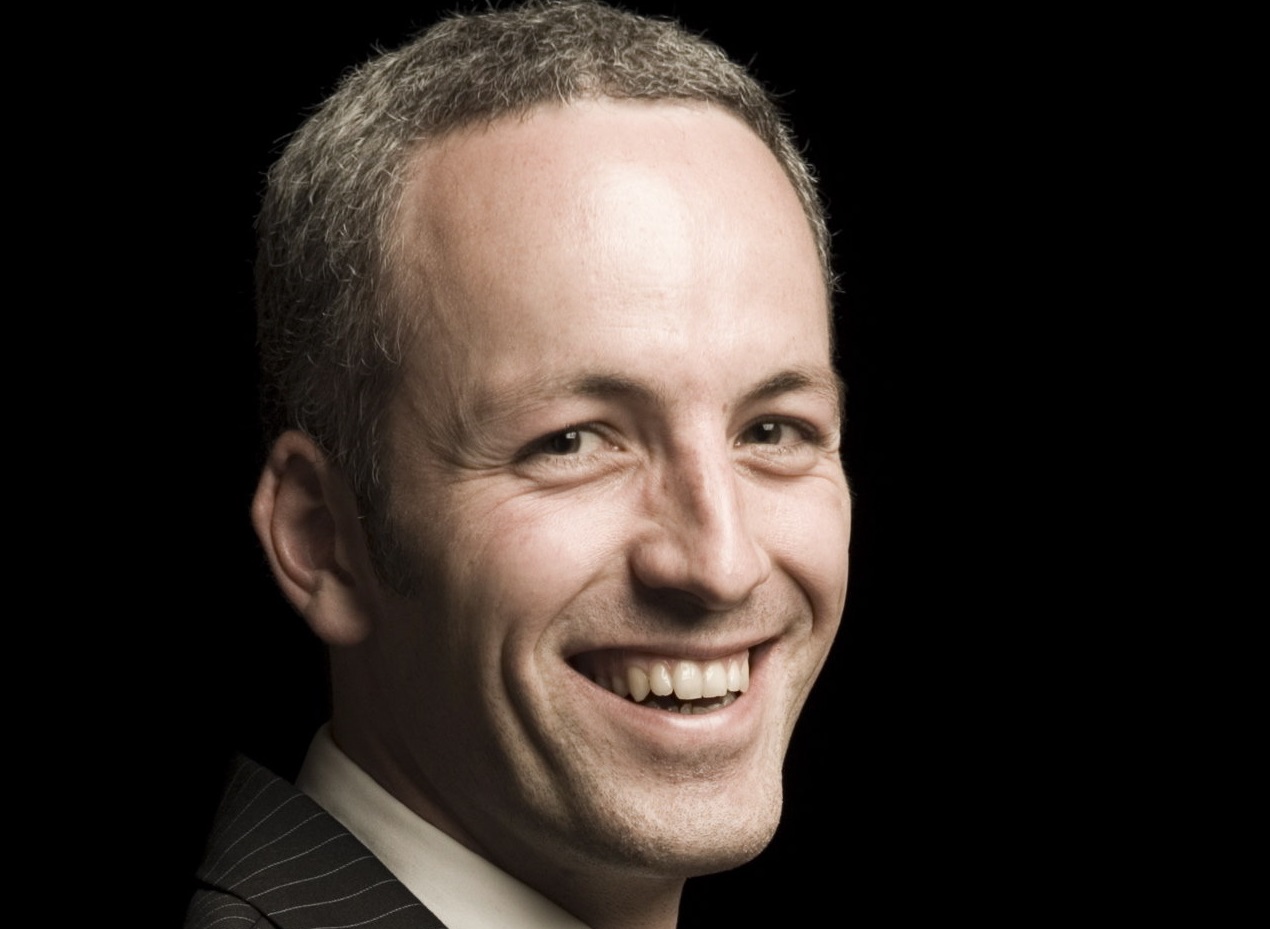 Oliver Johner, Member of the Council

From the article by Serge Jubin, newspaper Le Temps, Jura May 10th 2011

For a denizen of the Jura region, knowing Charles Burrus was a point of pride, which shows just how great his influence was. The industrialist died on Monday, at the age of 81. The man whom his fellow Boncourt citizens affectionately referred to as “Mister Charles” was a member of the sixth generation Burrus dynasty, which began in Alsace in 1814. The family built a major cigarette factory in Boncourt. The son of Leon Burrus, Charles took the helm of the family company, the largest private employer in the Jura, in 1979. Initially he worked with his cousin Xavier, the son of Gerard, and then on his own from 1985. In 1996, he sold the company to the Dutch group Rothmans, and in 1999 it was taken over by BAT.

Charles Burrus was the quintessential benevolent boss, as his forebears had been. This didn’t prevent him from selling a competitive business. The Burrus family was the first in Switzerland to offer their workers family benefits in 1916.

“Mister Charles” was quite popular. His philanthropy was appreciated. He was a major contributor to the development of the Saint-Charles Catholic secondary school in Porrentruy. He supported several athletic clubs, in particular the Boncourt football club. He sponsored the equestrian facilities at Chevenez. Charles Burrus frequented the upper levels of the Catholic hierarchy, with special ties to the Vatican. At one point, he offered the Guilé family home in Boncourt to a foundation that sensitizes opinion leaders to human and Christian values.

More than anyone else in his family, Charles Burrus remained rooted in Boncourt, although this did not stop his industrial influence from spreading throughout Switzerland. The Jura region was always grateful to him for this, particularly because he had decided to be a large contributor to the last of the cantons to be established. The history of Fondation Guilé goes back to the year 1814, when Martin Burrus started a tobacco business that would remain in the family for almost 200 years.

In 1931, his successor Léon and his wife Marguerite Burrus built a country manor to give a home to the spirit, values, and legacy of the family. They named the manor GUILÉ, a combination of their first names. The Domaine de Guilé became the place where the Burrus family hosted their large social network of relatives, friends, industrialists, politicians, philanthropists, military officials, and academics.

The tobacco magnate F.J. Burrus became a pioneer of corporate responsibility in Switzerland. For example, his company was the first in Switzerland to provide family allowances and corporate pension schemes.

After the family company was sold in 1996, Charles (1929-2011) and Bernadette Burrus felt a need to give back to society. They created Fondation Guilé to continue their family heritage and provide entrepreneurs with the necessary strategies and tools to become ethically responsible players in today’s international markets.

The couple inspired the foundation’s work towards peace and justice in order to give hope to future generations. Charles Burrus passed away on 9 May 2011. His spirit will live on in the activities of Fondation Guilé. 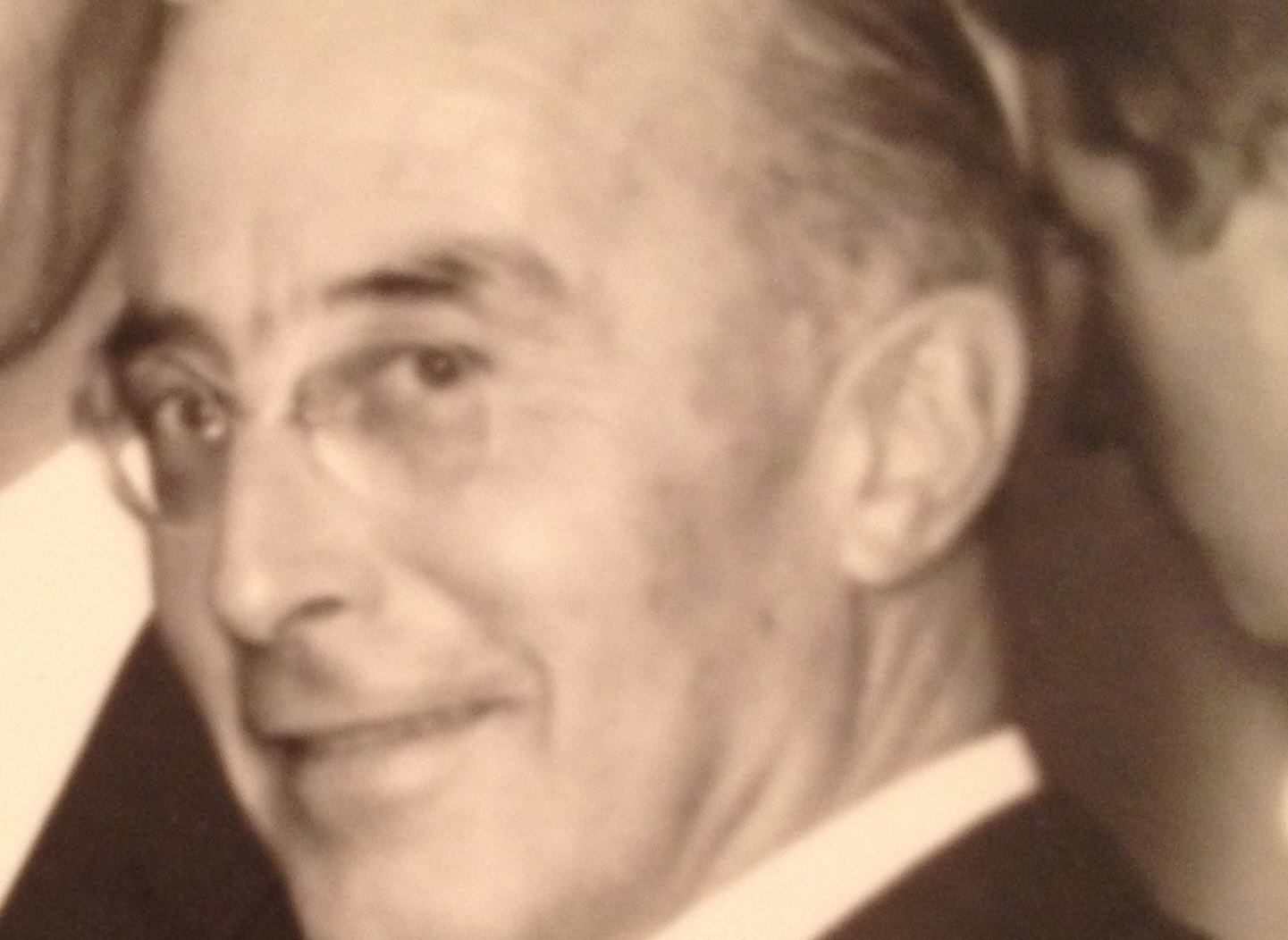 Leon was an industrial and urban planning visionary. As early as 1938 he began originating and creating cutting-edge production facilities.

In his capacity as mayor of Boncourt and president of the community of mayors of Ajoie for many years, he helped successfully manage numerous urban planning and development projects, including the hospital in Porrentruy. In addition, Leon guided the fate of the Collège Saint-Charles Catholic secondary school in Porrentruy, which he renovated. He built the classroom building, the gymnasium, and the pool, and offered scholarships to underprivileged students. Lastly, Leon supported local and regional sports clubs.

A staunch philanthropist, Leon Burrus was tireless in his pursuit of the social commitments begun by his predecessors within the company. In keeping with this tradition, in 1960 the Burrus Group revised the terms of pension funds for all its workers: laborers, employees, and upper management. Burrus partners added a “reserve foundation” to these funds at their own expense to even out the returns from the three funds. At the time, these pension funds were at the forefront of pension plans in Switzerland.

F.J. Burrus never built worker housing, but the company drafted a rule to offer construction loans at preferred rates compared to current rates on the real estate market. These loans would allow young workers who wanted to establish themselves to build their own home. The initiative was a huge success. For over 40 years, many heads of family made use of these loans to achieve every man’s dream: owning his own home. Two rental properties intended mainly for staff were also built in Boncourt. Fondation Guilé collaborated with the UN Global Compact in designing the “Blueprint for Corporate Sustainability Leadership”.

The project was initiated at a private event which took place during the World Economic Forum
(WEF) Annual Meeting on 29 January 2010. The event was hosted by Fondation Guilé in cooperation with the Swiss Government (represented by SDC), KPMG and Novo Nordisk.

The proposal for a “Blueprint for Corporate Sustainability Leadership in the Context of the
UN Global Compact” was presented by Thomas Streiff, Head of the Guilé Engagement Team. Important inputs for the design and development of the Blueprint were collected through discussions with high-level representatives from the private and public sector as well as the UN.

These findings informed Fondation Guilé’s work on the Blueprint and defined leadership within the Global Compact in three distinct dimensions:

Fondation Guilé is also a signatory and promoter of the UN PRI and is involved in the Sustainable Stock Exchanges initiative (SSE). This initiative aims to explore how exchanges can work together with investors, regulators, and companies to enhance corporate transparency, and ultimately performance, on ESG issues and encourage responsible long-term approaches to investment.

In support of the wider Sustainable Stock Exchange initiative, a group of PRI signatories sent letters to the top 30 stock exchanges, beginning in 2011, asking that they address inadequate sustainability reporting by companies. Fondation Guilé was one of the four service provider signatories of this letter.

Specifically, signatories were asked to support a call to global stock market listing authorities to consider possible actions that exchanges can take, including, but not limited to, the following suggestions: